Vlad is a Divine Executioner and part of the Divine Order, a servant of His Divine Shadow.

In the case of Vlad, her mission from several centuries ago appears to have resulted in a pursuit through a Fractal Core or other anomaly, as she is discovered on Earth having given rise to common vampire mythology in Transylvania. The many years spent in isolation appear to have had a detrimental effect on her systems, resulting in her having developed psychotic tendencies, using her abilities as an executioner to enslave people in the hopes of eventually finding a new source of protoblood.

Vlad's manner and actions are that of an embellished version of the vampire legends, to which she is supposed to have given rise. She makes use of parablood (possibly a protoblood derivative) to brainwash and enslave people to do her bidding in the hopes of trapping a new source of protoblood.

While her thrall seek out a new source of protoblood, she remains in a cryochamber, which is reminiscent of a coffin, in order to preserve her dwindling supply. Vlad requires protoblood in order to remain youthful and prolong her lifespan, similarly to the vampire legends involving the consumption of blood.

Using her bat-like cape Vlad also demonstrates an ability to fly, or at least glide, in a similar way to His Divine Shadow.

Vlad makes her first appearance in Lexx 4.7 "Walpurgis Night", where she regains her youthful form after digesting Protoblood that her three servants bring her after Kai is briefly detained in an Iron Maiden device, causing him to lose some protoblood.

Vlad becomes the emphasis of Lexx 4.8 "Vlad", in which Kai seeks her out knowing that she is extremely dangerous and is lurking somewhere in Dracul's Castle. Kai discovers Vlad's plot to wipe out the human population of Earth and tries stopping her. Their fight ensues on the Lexx where Vlad bites both Stan and Xev, only to not affect her and she ends up being pushed into a Cryochamber by the latter.

Vlad escapes the Cryochamber near the end of Lexx 4.10 "Fluff Daddy" and bites Uther, turning him into a slave, and then kills Xev. Vlad proceeds to suck the life out of Kai until Stanley Tweedle works up the courage to kill Vlad using the druid's staff. 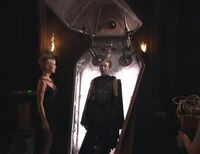 Vlad in a cryochamber 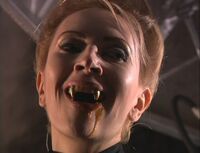 The Creation of Vlad 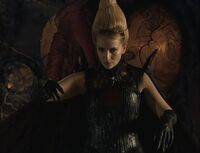 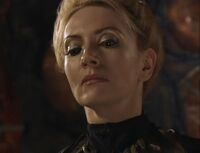 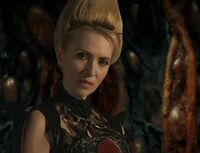