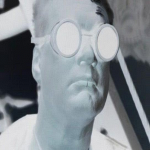 On the Cluster, the capital of the League of 20,000 Planets, a ship with the power to destroy planets lies waiting for its master - "His Divine Shadow". The soon-to-be executed rebel Thodin has his eyes on it too, and mangles the city's computer system while engineering his escape. Using the chaos that erupts, the death sentenced security officer Stanley Tweedle and the escaped "love-slave" Zev evade capture and eventually team up with Thodin... with the undead assassin Kai following, with orders to kill them all.

Retrieved from "https://lexx.fandom.com/wiki/User:PavelVedi?oldid=9993"
Community content is available under CC-BY-SA unless otherwise noted.