The episode aired on Mar 5, 1999 on the TV channel Space The Imagination Station in Canada.

The script for the episode was written by Paul Donovan, Jeffrey Hirschfield, Lex Gigeroff. The directors of the episode were Chris Bould.

Finding Stanley unconscious on the bridge, the crew seek medical help on an ugly little planet, Ruuma. Once there, Stanley recovers, only to learn that Ruuma's life giving qualities also give life to the long dead bodies of former Divine Shadows.

When Stanley Tweedle becomes gravely ill, the crew of the Lexx take him to the planet Ruuma. There they encounter a ghastly family: the father, Roada, is a scheming sleazeball, the last vestige of the Divine Order, left behind on the planet by his brethren after the death of His Shadow; the mother, Hidea, is a shrew; the daughter, Lomea, is a surly goth teen. Ruuma has the power to bring the dead back to a kind of shambling life, and the many corpses of His Divine Shadow's earlier bodies reside here, constantly trying to break in and devour the family. It was Roada's job to look after the bodies when the Cluster was still in operation, but now he's losing control of the situation and it seems the family won't survive long. The same forces that animate the corpses has an unusual effect on Kai and after Xev is bitten it's up to Lyekka to save the day. 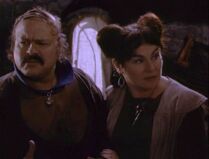 Image from episode Twilight
Retrieved from "https://lexx.fandom.com/wiki/Twilight?oldid=9959"
Community content is available under CC-BY-SA unless otherwise noted.