The brave little lizard is named Squish by Zev who immediately dislikes it, though it goes on to ultimately destroy the Giga Shadow by eating into its brain. The Giga Shadow was then destroyed when the Lexx fires upon the Fractal Core through which it had escaped. Squish makes no further appearances in the series after this.

In Lexx 1.4 "Giga Shadow", Kai discovers a unhatched cluster lizard egg in the Cryochamber of the the Lexx, which hatches and believes him to be its mother. 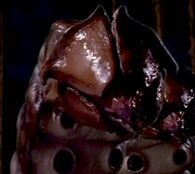