Security Drones are a type of robotic construct, possibly with bio-mechanical parts, primarily found on the Cluster. These hulking constructs constantly patrol populated areas of the Cluster in pairs, performing facial recognition scans on citizens and attempting to arrest or destroy known criminals.

The physical characteristics of the drones have them standing at upwards of 7 feet tall, most likely closer to 8 feet, with long armoured legs and arms and a bulky robotic head of a similar nature to 790 units but far larger with dome-shaped "eyes" for scanning the area. They are armed with a holstered Black Pack, restricting their role to either restraining surrendering criminals, or vaporising anyone that does not co-operate.

Their programming appears to be fairly simplistic, and they are entirely dependent upon their database for identification of criminals, making it possible to fool them into mistaking a person's identity. If disarmed, their only response is to politely ask that their weapon be returned.

Security Drones are first encountered in Lexx 1.1 "I Worship His Shadow", in which the are seen patrolling the cluster. It is a pair of security drones that pursue Zev and Stan, and later another pair mistakenly believe Thodin to be the winner of His Shadow's award of merit, allowing them to be easily disarmed and defeated by the heretics.

The drones are later seen briefly in Lexx 1.4 "Giga Shadow" when they are seen accompanying a strange clown-faced device around the Cluster during the Cleansing, hunting down the human population to strip them of their protein for the Rebirth.

A pair of security drones on the Cluster 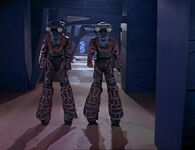 A pair of security drones on the Cluster
Add a photo to this gallery
Retrieved from "https://lexx.fandom.com/wiki/Security_Drones?oldid=11155"
Community content is available under CC-BY-SA unless otherwise noted.