Start a Wiki
Protoblood is an unusual substance produced by the Insect Species, apparently as a natural process, possibly related to the dormant infancy of their offspring. The substance is able to reanimate corpses, and even incomplete dead tissue of any kind.

This unique property of protoblood is exploited by the Divine Order to produce Divine Assassins, undead killing machines that are almost completely indestructible, and implacable in their attempts to kill their target(s).

The substance itself is white and gooey in season 1, but later appears more brown in colour in season 2 and beyond.

Protoblood is mentioned through the Lexx series, primarily in relation to Kai who requires it in order to remain animate. It is first seen in Lexx 1.4 "Giga Shadow" as the crew of the Lexx return to try and replenish Kai's dwindling protoblood supply. It is revealed that protoblood is released from an orifice in the Giga Shadow's exterior, ordinarily used as an entry for a Divine Predecessor to transfer its essence into the the massive insect. The protoblood revives several of the priests tasked with performing the final rights of the Rebirth, killed after Yottskry's attempt to stop the process, and with the intent to continue the transference of the insect essence. Despite her belief that she is too late to save Kai, Zev collects two large samples of protoblood, and dispatches Squish with a tube of protoblood to find Kai.

Kai's protoblood supply makes a number of appearances in later series, but most notably in Lexx 4.7 "Walpurgis Night" and Lexx 4.8 "Vlad" when the Divine Executioner Vlad is first given a small sample of Kai's protoblood, and later steals his entire supply for herself.

Another notable appearance of Kai's protoblood is in Lexx 4.15 "Mort" when some of Kai's expired protoblood is gifted to Mort in exchange for his help. The psychologically unstable Mort uses the expired protoblood to reanimate his beloved Didi, or rather the pieces of her he was able to reassemble after a tragic accident shortly before he finally professed his love to her. 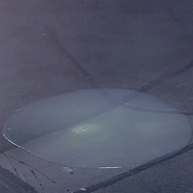 Add a photo to this gallery
Retrieved from "https://lexx.fandom.com/wiki/Protoblood?oldid=11073"
Community content is available under CC-BY-SA unless otherwise noted.