Oberon is one of the few characters like Prince and the Time Prophet whom are not completely known.

Like Prince who watches over the dead and the Time Prophet over the ages, Oberon seems to be guardian of life and magic, though by the time we see him he has decayed into a shell, reminiscent of mankind's destruction of nature.

Though he only specifies that Earth, he also notes that he has been around since the dawn of time (a statement that Prince also makes). So it us unknown whether the life of other worlds were once under his command.

The extent of his power is not completely known, though the staff artifact of his creation was sufficient to kill Vlad (arguably one of the Divine Shadows most powerful minions). He also has the power to shape matter in accordance to his will utilizing magic.

Stan, Xev, and Kai represent the end to the "cycle of feasts", which Oberon has hosted over the millenia, during each of which he gains a new bride. Titania is but the last of the many wives that preceded her, as the forest of trees (each one being a former dark man), and the field of flowers (each representing a former bride) symbolizes yet another trio of characters that were lure in by Oberon's magic.

It is worth noting that Prince and Oberon seem to only appear within the Dark Zone, whether this is because the Dark Zone represents chaos, allowing magic to work and hell to exist is unknown. 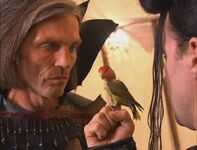 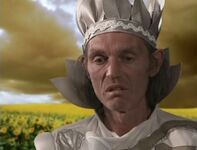 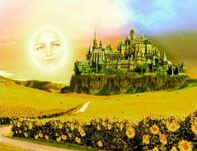 Oberon's castle]]
Add a photo to this gallery
Retrieved from "https://lexx.fandom.com/wiki/Oberon?oldid=10870"
Community content is available under CC-BY-SA unless otherwise noted.