The script for the episode was written by Lex Gigeroff, Paul Donovan. The director of the episode were Stephen Manuel.

For the character with the same name, see Moss.

The crew of the Lexx is caught up in the post-Waco politics of obsessed patriots headed by Moss. He court marshals them and becomes the judge, prosecution and defense. Unfortunately for Stan, Xev and Kai the verdict is guilty.

On the run Xev, Stan, and Kai are abducted by Moss, head of the AFR. Using information from them, he masquerades as Prince, and installs himself as the head of the ATF. Moss has numerous conspiracy theories involving "666", which are totally insane, but largely correct. He then puts the crew on a show trial for being in league with Prince, where he plays all legal roles, then decides to execute them.

Prince (residing in his TV set) directs Bunny to read a note to the Idaho AFR, who then ride a moth to the ATF, and shoot all the AFR. 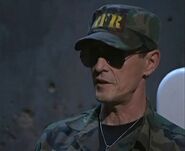 Moss is head of the AFR