Lyekka is an extra-terrestrial, carnivorous plant creature that can take on a human appearance.

There are three versions of the character Lyekka, the first is a human girl whom Stanley had a crush on in his youth. This is the form the plant Lyekka assume when she reads his mind during a dream about this prior crush. The third version is another member of the plant species, yet is only related to the first plant Lyekka in form and race.

Lyekka first appears in the eponymous episode Lexx 2.3 "Lyekka", where she is first seen floating in space, sneaks on board the Lexx, and takes the form of a human girl from Stanley's youth that he had been dreaming of. While on board, Lyekka is usually in the form of a pod that is suspended from the ceiling of the bridge of the Lexx, but she periodically wakes up an returns to her human form in order to find food to eat.

In her first episode, Lyekka eats the crew of 3 astronauts/space farmers from Potatohoe. As gratitude to the crew for agreeing to let her stay on the Lexx, she revives Zev (who had just died in the previous episode) as Xev.

Lyekka reappears from time to time throughout Season 2 whenever she is hungry and eats someone, who is usually an antagonist or a guest on the Lexx (or sometimes helpless prisoners as seen in Lexx 2.9 "791").

In Lexx 2.20 "End of the Universe", Lyekka's pod on the Lexx is destroyed during an attack by Mantrid Drones. She then uses her ability to sense the dreams of other people to locate Mantrid and then transforms herself into a one-armed Lykka drone to allow her to sneak inside and damage Mantrid's mechanical body before being killed.

Lyekka is reincarnated as herself in Lexx 3.9 "Garden", but is killed by Prince soon after in Lexx 3.10 "Battle".

Lyekka has a much larger role in Season 4.

In Lexx 4.20 "Apocalexx Now", another version of Lyekka appears on the Lexx, claiming to be a representative of the carrot probes and trying to persuade the crew not to destroy their asteroid ship.

Lyekka devours people on a much larger scale in Lexx 4.23 "Lyekka vs Japan", by literally eating entire nations/countries similar to how the Mantrid Drones destroyed entire planets.

Meanwhile, a race of plant aliens — probably Lyekka's race, although this is not made absolutely clear — comes to Earth intent on eating all the life on the planet. They copy Lyekka from Stan's dream and use her as their representative, although she makes it clear that she is not the same Lyekka Stan knew before, saying, "I am a plant. I am like Lyekka. But I'm not the exact same Lyekka. I am... a new Lyekka. I'm Lyekka's sister, Lyekka." These aliens work out a plan with US President Priest to eat Japan in exchange for leaving the rest of the Earth untouched; but the plant aliens are lying and plan to go ahead and destroy the Earth. They send a Godzilla-sized Lyekka to destroy Tokyo in the Lexx 4.23 "Lyekka vs Japan", but Kai and Xev manage to defeat her. Eventually, the plant race mounts an all-out attack on Earth.

The Lyekka of season four is a rather sinister character, and in addition to plotting against the Earth she also sends the Lexx crew a pod containing a hallucinogen that almost leads to them killing each other. 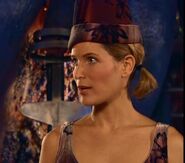 Add a photo to this gallery
Retrieved from "https://lexx.fandom.com/wiki/Lyekka?oldid=10202"
Community content is available under CC-BY-SA unless otherwise noted.