Giggerota is a cannibalistic human from Boron-7 who in her own words, "likes to eat".

While she is conscious enough to know her surroundings, she appears to lack much in the way of education and refers to people and things using relatively simple nicknames such as "waste of skin" for Stanley Tweedle, "girlfriend" for Zev, and "giant bug" for the Lexx. Giggerota doesn't really care for other humans other than to eat them for a snack, she was somewhat of an antagonist in Episode 1.1, and a major antagonist for Stan in Episode 1.2.

In episode Episode 1.1: "I Worship his Shadow" Giggerota is rounded up and taken prisoner aboard a Prison Transport and taken to the Cluster for sentencing. Giggerota is tried then and there by a holo judge and found guilty for 62 counts of cannibalism, murder, and failing to perform her wifely duties (though she protests that it was "more like 162"). Giggerota is able to escape with Thodin's help, however she declines freeing the other heretics in favor of finding some food. Giggerota stows away on board the Lexx and gets into a small scuffle with Zev, after reaching the bridge. Giggerota suggests Stan take them to the Frontier, however she is later found by Kai and tossed over the railing of the bridge, presumably dying.

In episode Episode 1.2: "Super Nova" Giggerota is shown to have survived her fall and approaches the bridge looking for the "waste of skin", she is met by Zev, Stan, and Kai who tie her up and gag her to prevent her snake-like tongue from harming anyone.

Giggerota eventually gets free and is compelled by the "think meats" (Divine Predecessors) to go to Brunnis to bring back Stan. She is at first reluctant to undertake such a task and rather indulge herself by devouring some brains, however she finds to her chagrin that they are not as good tasting as they appear (they taste "too salty" in her words). The Divine Predecessors show Giggerota a vision of the Planet of the Milk Fed Boys, a world where the inhabitants are well muscled and fit, drinking milk all day long. She sees herself sitting at a table being brought an adolescent boy on a serving tray, licking her lips and ready to devour the boy.

Giggerota accepts the Divine Predecessors' deal and goes to Brunnis via Moth and fetches rescues Stan from an impending insemination by the Poet Man's holograph. Giggerota then shuts down the planet's stabilizers, the only thing keeping Brunnis' sun from going supernova. Giggerota gets fed up with Stan's attempts at stopping her and bites off his hand and returns to the Divine Predecessors only to be told that they require Stanley's entire body. Giggerota leaves the hand and returns to Brunnis while eating her Moth, she gets out to find that the Lexx is leaving on its own (The Predecessors used Stan's hand and mimicked his voice to trick the Lexx into thinking they were him) and her moth flees from her laughing wildly. Giggerota is left stranded on the rapidly decaying planet Brunnis, Giggerota seemingly unafraid of the Brunnis Sun and Blue Star demand that they "put on a show for her", a request that is fulfilled by the entire planet going supernova, incinerating Giggerota in the process.

Giggerota returns to haunt Stan and Xev's dreams in season 2, in Episode 2.14: "Patches in the Sky" via the Narcolounger.

Stanley, apparently traumatized by his previous experience with the cannibal, has nightmares about her which seem to disturb him greatly. In the Narcolounger, Giggerota appears to Stan in his dream to torment and kill him, apparently as a manifestation of the guilt Stan feels for his crimes and his fear of death. Though apparently only a figment of Stan's imagination, this Giggerota is still quite murderous, and kills Gubby by inhaling him through his own pipe before attempting to kill Xev and Stan as well.

Giggerota is reincarnated on the Planet Fire as a body-less Queen, and ruler of Girltown. Queen is bored with her councils and balloons and is interested in Stan's body, since she is only a head. Stan is confused and believes that she wants him sexually, which is not correct.

Kai emancipates the imprisoned gay/transgender men of Girltown, and begins a revolt. One of the seamstresses adjusts the Queens controls on her bath which causes her to drown.

Giggerota's Earthly incarnation is Genevieve G. Rota, a Prime Ridge Real Estate Agent first seen in Lexx 4.4 "Stan Down". She also appears in Lexx 4.24 "Apocalexx Now" as the first female pope, chosen after the Papal conclave stalls and decides to select her from a real estate brochure that just so happened to be in their meeting room.

Genevieve is aware that she "woke up" on Earth as Genevieve G. Rota, Real Estate Agent, but does not quite know what she was. On a golf trip to Vietnam, Pope Rota kidnaps Stanley and Priest, tying them up and trying to knock over gasoline canisters over onto candles surrounding both Stanley and Priest. Priest pleads to her that he is also aware that he simply "woke up" on Earth as well, though Genevieve does not appear interested.

She eventually accepts that she was from the planet Fire, in "some weird way." She tells Lyekka she has dreams of eating people shortly before being eaten herself. 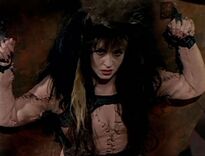 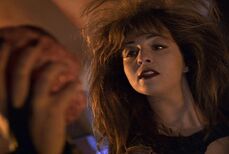 Giggerota and the Divine Predecessors "talk" 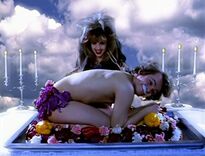 Giggerota indulging in the Predecessor's vision of the Milk Fed Boys 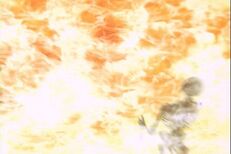 Giggerota's demise during the Supernova 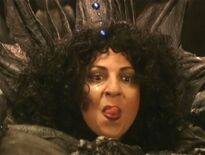 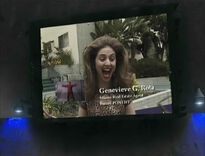 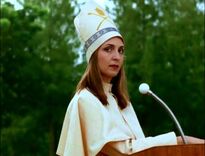 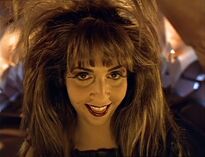