The Divine Order is the main religion in the Light Zone, created by the last of the Insect Civilization, as a means of controlling the human population of the Light Zone, and ultimately use them to destroy themselves (since as stated by His Divine Shadow, being the last of the insects, he alone could not destroy all of humanity).

The primary symbol of the Divine Order is a circular aperture, similar to the iris found in the mechanical shutter of a camera. It has also been described by art director Mark Liang as being a 7 sided talon or cutworm-like shape.

This symbol is found throughout the Divine Order, emblazoned on the walls of buildings on the Cluster (such as Stanley Tweedle's security post), as well as moulded on clasps for the cloaks of the Divine Clerics, the medallions for His Shadow's awards of merit, and so-on.

Other notable occurrences of the symbol include the pendant of Brizon, a Divine Order symbol of office that can be used to control most (or even all) bio-engineered technology of the Divine Order, including the Divine Assassins such as Kai.

The symbol itself may originate from the shape formed by insect species such as the Giga Shadow, or Cluster Lizards, when they are curled up into a circular shape for mobility. In such cases the shape is formed from the interlocking armoured segments of these species' armoured bodies. The airlock on the Giga Shadow into which Squish is thrown is also in this shape.

Variations of the symbol exist, including some that are based around the central "talons" of the symbol themselves. The most prominent example is seen on Ruuma during Lexx 2.13 "Twilight", where a three-taloned version of the symbol, without enclosing ring, is used to open a door to the roof of the compound.

Ranks within the Divine Order:

The symbol of the Divine Order. 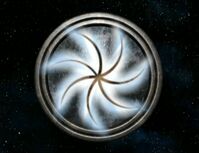 The inner "talons" of the symbol, sometimes seen as a symbol in their own right. 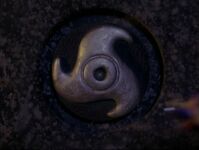 The door control of the Divine Order compound on Ruuma.