Bunny first appeared in Season 2 Episode 2.10: "Wake the Dead" as Laleen, a party-going teen from Bingo-44 who were all traveling to an event as a group. Bunny has reappeared in every season of Lexx after her initial appearance, having a more prominent role in the final season as the first lady.

Laleen is discovered by Xev to be sleeping in a Cryo-Unit, along with four other teenagers (Enox, Gibble, Kanana, and Tad). Xev takes the teenagers from the shuttle onto the Lexx, where Stan gives them the grand tour and explains how the "most powerful weapon of destruction in the two universes works".

Laleen gets jealous after seeing Enox flirting with Xev, and she starts to flirt with Stan (which may actually be more than just jealousy) until he decides he needs to get to bed. Later Laleen and Stan meet up again, and Laleen wants to "do it" with Stan but he is reluctant until she makes the point that she is three centuries older than he is and he quickly obliges. Back in Stan's room, they play a little game of tag before Stan gets tired out and Laleen decides that her pits stink and opts to take a shower before they "do it". Laleen is showering by herself (showing a full shot of her backside and a tattoo of a white panther crawling down her backside) when she hears what she thinks is Stan only to find a corrupted and albeit psychotic Kai lunging at her. Laleen is killed in a fashion somewhat reminiscent of Freddy Krueger from the "Nightmare on Elm Street" films.

Bunny makes her first appearance in Season 3 in Episode 3.03: "Game Town", as part of a group of energetic young citizens of Water who do nothing but play games and have sex all day. Bunny becomes infatuated with Kai and tries making love to him, but he clearly explains his situation as being "dead" (he cuts off his hand). Bunny's last appearance in Season 3 is Episode 3.05: "Gondola", where she is thrown overboard a balloon by Fifi to make weight.

In Season 4, Bunny is wife of Reginald J. Priest, who is the President of the United States. This Bunny makes her first appearance in 4.06 'The Rock' after the death of Priest's first wife. This Bunny is rather ditzier than the last two, and is easily manipulated by Prince and her husband. She spends most of her time attempting to get her husband to have sex with her, and is rarely successful, usually due to Prince's interference.

She seems to be in love with Priest in a similar manner to the way 790 is in love with Xev/Kai, albeit without the sociopathic tendencies. Prince arranges numerous sexual liasons between Bunny and Stan, either to attempt to get something from Stan... or simply to punish Priest, but none of them ever come to fruition because Stan doesn't make Bunny feel tingly like the Priest does, although she does wind up having lesbian sex with Xev. While previous incarnations of Bunny were undoubtedly 'good', the season 4 Bunny is somewhat more morally ambiguous. If left on her own, she still acts mostly in a 'good' way, but in the prescence of Prince and her husband, she will typically go along with whatever they do and will obey their commands (for instance, when she almost destroys the Earth at the behest of her husband, albeit reluctantly). 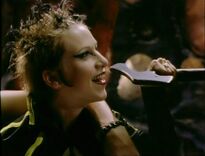 Bunny when she was Laleen, in the Light Universe]] 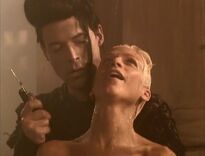 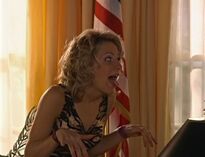 Bunny is wife of President of the United States 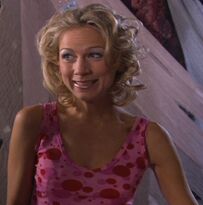 Bunny as the First Lady in Season 4
Русский
Community content is available under CC-BY-SA unless otherwise noted.
Advertisement