"A Midsummer's Nightmare" is the 11 episode of 4 season of the TV series "Lexx".

The script for the episode was written by Jon Spira, Andrew Selzer, Paul Donovan. The director of the episode were Carl Harvey.

Stan and Kai take Xev's beautiful corpse down to the feast of Morgath because Uther vaguely promised that the dead could be risen. There, Oberon recognises the Red Fool, and The Dark man, and dominates the proceedings; attempting to marry Xev for 1500 years. Kai is turned into a joyful singing tree. Xev refuses Oberon, so he turns to Stan, who also refuses him after he realises that Oberon wants 1500 years of back door sex. Puck remains mostly neutral. Titania saves them by tricking Oberon into marrying her/him for eternity.

It begins with Stanley & Kai transporting Xev's perfect corpse to The Feast of Mograth in order to have her reanimated, as vaguely promised by Uther (in the previous episode). Upon arriving at the feast they are ensnared in King Oberon's devious plot to marry someone (anyone).

Kai is rendered defenseless by Oberon's powerful magic. He is turned into a happy, joyful, tree thing, joining many other tree-people singing an endless song in praise of Oberon.

Xev turns down Oberon and is eventually turned into a tree herself, and then Oberon turns to Stan (being more his type). After initially being tempted, Stan decides that Oberon is perhaps not his type. Titania saves the day by tricking Oberon into marrying her/him again for eternity.

Cover of episode «A Midsummer's Nightmare» 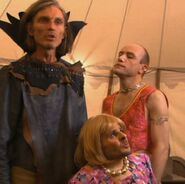